Are Electric Cigarettes Really Better for You? 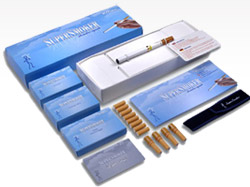 A recent FDA survey of electric cigarettes pointed out that:

For all these reasons, we recommend a non-toxic, nicotine-free stop smoking aid instead. Read on to learn more about electric cigarettes.

What is an electric cigarette?

Most electric cigarettes are made to look and function exactly like a real cigarette, except that operate with flavored water vapor instead of actual smoke. An electric cigarette is comprised of a few main components: a battery, an atomizer, a filter that contains nicotine or tobacco flavoring, and a charging component. The filter portion works as an inhaler, and the tobacco flavoring or nicotine is delivered through the act of inhaling, exactly as with an actual cigarette.

Those that contain nicotine don't treat nicotine addiction. Therefore, many who try electric cigarettes stay addicted -- but now the delivery system is different.

Other shortcomings of electric cigarettes

Electric cigarettes are small and easily portable. Because they don't emit smoke you can "smoke" them in restaurants, hospitals and other places where cigarettes are forbidden.

However, electric cigarettes (price $60-$150) require batteries and filter packets. The filter packets contain flavoring along with chemicals and (most frequently) nicotine. The cost of replacement filters ranges from $20-$50 per box (a box contains 3-5 filters). Once again, this substitute for cigarettes is nearly as expensive as smoking tobacco.

Replacing one addiction with another is not a viable solution. An effective cure for smoking does more than provide nicotine through a different delivery system. If you're serious about kicking the habit, consider an herbal supplement that soothes cravings rather than feeding them with more nicotine.