No matter where you go in this world there is one thing that any rational and informed person would tell you and that is that cigarette smoking is bad for you. In fact, it has now reached the point where nearly every child old enough to talk can tell you something about the dangers of smoking simply because child educational services and institutions all around the globe are making it a point to let children know about this habit, which has a history dating back hundreds of years in some cultures and even thousands of years in others, at the earliest possible age. And, the result of all of this is that societies everywhere are becoming less and less tolerant of smoking and smokers by continuously adding restrictions on what can be bought and when and where it can be used.

Furthermore, all of these factors have led up to the current situation where societal pressures are greater than they have ever been before in most of the developed world when it comes to attitudes about smoking and smokers and how they are treated by their fellow citizens. Whereas smoking was once considered to be a symbol of coolness it is now largely considered to be a sign of weakness and ignorance. However, this is not the case in all parts of the world where, despite all of the educational and societal pressures, smoking is actually on the rise in some regions, most notably in many parts of Asia. And, the tobacco industry and others are not taking this large loss in revenues lying down as they continually introduce new products which would seem to avoid the stigma of smoking yet deliver the addictive qualities of nicotine. The primary form of this can be seen in the explosion of the use of electronic cigarettes which is now classified as vaping and not actual smoking.

The devices, commonly known as e-cigarettes are similar to tobacco cigarettes in the sense that the user inhales a substance which delivers nicotine directly into the lungs but does so by turning the product into a vapor which quickly dissipates in the air, therefore, does not produce the noxious smoke that others have to deal with second hand. And, as recent studies show, these products are increasing in use exponentially among the younger generations and especially among teens in high school and even junior high. So, it is no secret that many are searching for ways to combat the addictive nature of nicotine to help them not only kick the habit of smoking but rid themselves of the craving for nicotine.

The good news is that there are now many smoking cessation products on the market and a number of them have a positive track record but many more act as nothing more than nicotine replacement methods. The bad news is that the industry that produces them has recently become deluged with literally hundreds of newer products, many of which are being shown to be far less effective and, in certain cases, less safe than many of the best options which the industry has been providing for years.

Keeping all of this in mind we, as a part of our continuing efforts to help our many valued readers find the products that most likely work best for them, have decided to take a long hard look at one of the most talked about smoking cessation products out there on the market today - it's called Quit WTR. 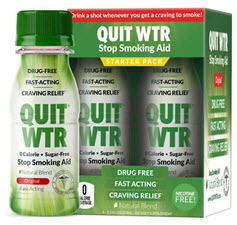 Made and distributed by a company of the same name, Quit WTR is one of the few products of this nature which is made in the form of a liquid. The key thing to understand about it is that it claims to use a set of all natural ingredients, many of which cannot be quantified as they are registered as part of proprietary formula. This simply means that they producer has not fully disclosed their exact usage in an effort to keep the actual formulation a secret from their competitors. However, in the process they are actually keeping it a secret from consumers who may want to know what's in Quit WTR, as well.

Still, the bottom line here is that the product is designed to reduce the cravings brought on by nicotine and relieve stress and anxiety associated with withdrawal.

A review of the listed ingredients in Quit WTR seems to be in dispute according to different sources that we were able to locate but one source stated that it contained multiple all-natural elements including Caladium, Nux vom, Daphne, Plantago, Staphysagria and Tabacum.

Having access to the list of ingredients in any product has its benefits as it allows consumers to see if the product uses the elements which are deemed to be most desirable or to know if it contains elements which may be undesirable in the sense that they may cause health concerns including potential allergic reactions. Still, it is a widely held belief that there are other and more important sets of details which can only be found in the data gleaned from any research, studies or clinical trials which may have been conducted assuming the product was made in a region which required it which is not always the case.

Looking at all of the available information from both the maker of Quit WTS as well as numerous other outside industry related sources we could not locate any reports of a credible or verifiable nature which would offer evidence that could be considered to be in support of the multiple and varied claims being made to this product.

What many younger consumers may not realize is that in the days before the wide public use of the internet most people had to way to know just how good or bad a product or service might have been since there was no real way for consumers to talk to each other on a large scale. This meant that most people's knowledge of the product relied heavily on the image that the company and its marketing had worked to establish. And, once consumers began to hear what other real users were saying, which was often not good, many companies began efforts to dissuade consumers from relying on what other people were expressing in user reviews. Of course, this led to a situation where most consumers began to distrust what they saw in the form of testimonials and consumer reviews. This being the case, we always seek out sources of more independent and less biased user comments.

Basing a review on numerous websites for companies and organizations within the smoking cessation industry with no known affiliation to Quit WTR as a product or as a company as well as a wide array of online forums and chat rooms we found numerous independent user comments regarding this product. A review of the overall satisfaction ratings showed that the large majority of users did not believe that Quit WTR lived up to its claims in any meaningful or lasting manner.

How Safe Is Quit WTR?

Looking at the listed ingredients as we understand them it does not appear that there would be any significant health concerns for consumers who have no existing medical issues. However, it is always best to consult with a physician or other qualified medical professional before beginning use of this or any other product of a similar composition.

How To Buy Quit WTR

Having no official product website that we could find consumers can turn to a wide array of well-established online retail platforms such as Amazon.com. Research shows that pricing for this product varied significantly across these outlets so some research by consumers will be needed to get the best price available.

The question here is how well does Quit WTR stack up against its competition. To know this we looked at just three key factors.

The first was the listed ingredients and there appears to be some dispute regarding this proprietary formula. The second dealt with data from research and testing and we did not find any credible evidence that Quit WTR was ever subjected to any of these processes. The last related to the comments for actual users and, in this case, the overall ratings were quite poor.

To wrap it up, it seems that Quit WTR has a long way to go before it can seriously be ranked among the top performers in smoking cessation products.