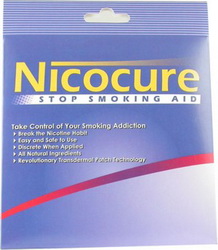 Nicocure is an all-natural herbal formula that eliminates the body's need and cravings for nicotine. The product consists of a homeopathic liquid sublingual (under the tongue) spray which contains ingredients to quickly combat symptoms associated with nicotine withdrawal, including nausea, cold sweats, shortness of breath, stuffy head, aches and pains, insomnia, increased appetite, and irritability. The recommended dosage is two sprays under the tongue three times a day. The product's effectiveness is increased by also taking the companion product, an herbal supplement in capsule form, once per day. The Nicocure system also features a program to help deal with the psychological issues associated with smoking. This feature is helpful since smoking addictions have both physical and psychological components.

Nicocure's natural herbal formula includes an effective blend of ingredients for the treatment of symptoms commonly experienced when stopping smoking. The gentle homeopathic ingredients include:

Update: Nicocure has recently been renamed Smoke Deter, which can be purchased online without a prescription. See our complete Smoke Deter review.

Customers who have used Nicocure have mostly positive things to say about the product. They mention that taking Nicocure lessened their cigarette cravings, and they suffered few side effects. The best success rate for stopping smoking with Nicocure was among those customers who had a strong desire to quit smoking. Unlike some other stop smoking products, users reported no drowsiness or weight gain. Several users of Nicocure reported that the formula stopped them from smoking for just a short time before they started smoking again, but they were a small minority of those customers reviewing the product. Nicocure's natural homeopathic ingredients can be effective in helping to stop smoking, but scientific research has not proven the effectiveness of the minute homeopathic levels included in the product. For a more potent but still natural product to help with stopping smoking, reviewers have found that the ingredients found in NicRx are more effective in curbing their cravings for cigarettes while avoiding adverse side effects.