One thing is clear in this day and age and that is that smoking cigarettes and the use of other tobacco products in no longer in fashion pretty much every person on the planet knows it. And, the further one travels into the most developed parts of the world, they will find that smoking in public or just about anywhere is pretty much prohibited and definitely frowned upon. In fact, the attitudes toward smoking have reached the point where nearly every young child of school age is being taught about the dangers of smoking and tobacco use. And, it is likely that they grow up in a world where smoking will be something that was basically a thing of the past through a combination of regulation and social norms.

Even now it is at the point where governmental and societal pressures have made even the thought of smoking something that requires some form of a mental health issue as a large part of the population, especially among the well-educated, is treating smoking and the use of other tobacco products as a crime even when that is not actually the case. Even worse, those societal pressures are convincing most people that others who smoke are weak in spirit and ignorant of the potential ill effects. Still, it must be pointed out that, despite the great backlash against smoking and tobacco use in the developed world, cigarette smoking is actually on the rise some of the most highly populated parts of the world, specifically in parts of Asia.

Taking all of that into consideration, it should be known that the tobacco industry, as a whole, is not sitting back and watching its multi-billion dollar per year business go down the tubes. For example, they are pushing back with a growing list of newer products mainly designed to take away the stigma associated with smoking and tobacco by shifting the means of absorbing nicotine from flammable tobacco to chemical substitutes which can release inhalable nicotine into the lungs simply by electronically heating nicotine filled pellets through a device now commonly known as the e-cigarette. And, as recent studies have shown, these new and smokeless products are gaining in popularity at an exponential rate. This is especially true among younger people in their twenties and teens and even those so young that they are still in middle school.

So, even as governments and societal pressures continue to push smoking and general tobacco use into the past the cravings and addictive qualities of nicotine absorption is still an enticing prospect which is still capturing young people and driving them into a habit that can be very hard to kick. So the big question is - how can people who want to stop smoking and end the cravings for nicotine when the act of kicking the habit can be so hard to do for so many? Well, the answer is not too simple as there are now a growing number of options for those seeking help with this issue.

Knowing this to be the case we, as a part of our ongoing efforts to help our many valued readers find the products that will most likely work best for them, have decided to take a long hard look at one of the most talked about smoking cessation products on the market today - it's called Kongdy Anti Smoke Patch. 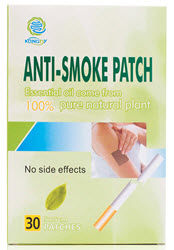 This product is manufactured and distributed by a firm known as Kongdy. Its Anti Smoke Patch is among the growing number of products of this kind which utilizes the patch method. The one key aspect to know about the Kongdy product is that it is said to utilize a list of all natural ingredients. In essence, this means that maker has decided to jump on the bandwagon of growing companies that want to cater to a growing segment of the population who are not inclined to use chemical based products.

However, the key thing to remember is that this product has been designed to deliver a mixture of ingredients through the use of a dermal patch which is said to reduce the symptoms associated with nicotine withdrawal including the relief of stress and anxious feeling often associated with the addiction qualities of tobacco use.

Looking at the listing of ingredients for this product we found that they are all, indeed, of the natural variety and in line with many of its top competitors including a number of leading brands within the industry. They are said to include Codonopsis Pilosula, Chrysanthemum, Menthol, Clove and Natural Tobacco.

No one would dispute the benefits of having access to the basic information about a product such as this and including the list of ingredients. This way, anyone can see if it contains the most desired elements and it may contain any that might be of concern as would those that could potentially lead to unwanted side effects such as allergic reactions. Still, those who seek more in depth information can turn to data derived from research, studies and clinical trials with the assumption that any of that has been done since it is not always mandated for products of this nature given the wide variance in regulations concerning what is required to bring these types of products to market.

Conducting a survey of several key industry sites where these types of reports can be found we did not find any evidence that this product was ever the subject of any intense or credible research or testing.

In the years before the advent of the internet and the widespread use of it by consumers all they had to go on when assessing how good or bad a product or service may be was whatever information the company and its marketing firm decided those consumers should see. But once consumers around the globe began to talk to each or and see what their experiences were with what these producers offered all of that changed dramatically. So, as one would suspect, many of these companies began to search for ways to counter the poor ratings that they started getting on user reviews sites by creating or helping to sow doubt as to the veracity of these types of user reviews. Of course, this situation has led to a great deal of suspicion among consumers who fear that they are viewing reviews with a high degree of bias. This being the case we always seek out truly independent sources of user comments and reviews.

Using a survey of numerous and well-respected industry sources with no known affiliation to Kondgy or its anti smoking patch as well as multiple online chat rooms and forums which have a long history of talking about smoking cessation products we located a large sampling of independent user reviews for this product. A precise tally of the overall user satisfaction rating among these reviewers showed that the vast majority of them gave the Kongdy Anti Smoking Patch rather low ratings.

It appears that Kongdy did not provide an official product site for this product but consumers can find it for sale through many well-known online retailers. It should be noted that seems to be a wide variance in pricing so some research may be required.

What we set out to do here was to determine if Kongdy Anti Smoking Patch was among the best options for those seeking relief from the cravings associated with nicotine withdrawal. To do this we looked at just three key factors.

The first was the list of ingredients and, in this case, it was found that they compare favorably to most products of this kind, including a number of the leading brands out there today. The second factor is related to any research or testing that may have been conducted on the product, specifically, and here we could find no scientific evidence that would support the multiple claims being made. The third and last factor was what independent user reviews had to say regarding their experiences and the results were rather poor given the number of ingredients which have a significant track record of success.

Taking all of these factors into consideration, there is no real way that it could be said that Kongdy Anti Smoke Patch is one of the leading options for relieving craving due to nicotine withdrawal.